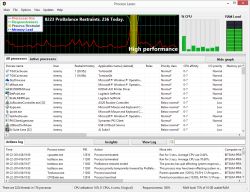 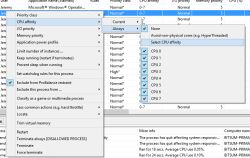 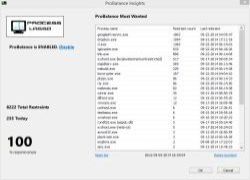 Process Lasso is a process priority optimization and system automation utility. It provides a ProBalance Technology, which restarts CPU hogs and helps your computer retain responsiveness during CPU loads and helps to adjusts the priorities and/or CPU affinities of running programs on-demand. Process Lasso, and it's ProBalance algorithm, are as usual and efficacious for new PCs as they are for old PCs, especially since the speed of processors hasn't been increasing a lot in recent years, replaced instead by increased parallelism (more cores).

Core optimization technologies allow you to choose on what CPUs/cores a process should run, as well as what their CPU priority class and I/O priority class should be. You can also disallow specified processes from running, log all processes run, and even set various other process rules.

What's New: Gaming Mode has been improved to include a pre-customized power plan for maximal performance. Right out of the box, it can even enter Gaming Mode when you play any Steam game. Of course, the ProBalance algorithm also continues to keep CPU hogs out of the way of your favorite game. Further, we've begun early addition of a selective RAM trimming technology to tackle RAM hogs.

Bitsum team does not believe in RAM 'optimizers' because they operate in such a brutish fashion, forcing everything to be paged out, resulting in all pages of memory in use being paged right back in (a hard page fault). Bitsum SmartTrim is more selective and discriminate. It's a scalpel, not a hacksaw.

Installed and registered without any difficulties.

The last time this was offered I said I have never noticed any improvement whilst using this program but things have changed since then as recently my very old install of XP is misbehaving.
My system is locking up and going slow as certain programs are getting in a bit of a tizzy and hogging the CPU.

Been running just short of a couple of hours and there is a noticeable improvement in system response, looks like it is controlling these programs.

So it appears that when a system is getting old this program can offer improvements to the overall performance.

Lots of people are very happy with this program and I'm pretty sure that under certain circumstances improvement will be noticed, this probably will depends a lot on the way you use your computer particularly if you have lots of programs open at the same time.

So for anyone who is having problems with a sluggish system it is probably well worth giving it a try.

Not installed, see my last comment:
"Meanwhile I have deleted this program from my PC. In my personal impression, the system works better without – on a modern system with enough memory."

An US company with address:

Bitsum LLC, located near Knoxville, TN, is a privately owned software company that provides software and expertise in the fields of Windows Optimization, Embedded Linux Development, Lossless Compression Algorithms, and much more.

This new version 8 has a new feature:
https://bitsum.com/smarttrim/
"The Truth About RAM Optimization"

It is worth reading. I am sure, we will have an interesting discussion about this software with so many fans.


At least I can say until now, it is readable and useable on this small tablet screen. This is not always the case. LOL

Karl, the resource consumption you mention is by the GUI while it is open and actively showing things.

As you know, the core engine (processgovernor.exe) can run silently in the background and will consume <0.1% CPU and <2Mb RAM on most PCs.

You seem to be dead-set against Process Lasso, and that's fine. If it's not for you, then that's OK. However, I do have concerns about how aggressive you are at attacking it, and your comments are a bit misleading, for instance by suggesting the GUI would consume that level of CPU cycles all the time, or by suggesting there are system bugs, none of which we've seen or heard of before, and none of which make sense. Process Lasso has no shell extensions or browser add-ons, so should not affect the behavior of any other application the PC.

Now my tablet runs the whole morning. Emails and Microsoft Office. I was happy before with this Windows Bing 8.1.3 32 bit version. It runs better and smoother than my Samsung Android tablets. You may believe or not, I use mostly the Windows tablet, but I miss the Android Firefox version, which has a much better handling.

Is there a setting for tablets? I did not find any.
Uninstalled from this tablet, 3% to 7% process time for 0 "pro balance" improvement is way to much. I can live without that.
Greetings from Germany

Bit Timer - Interval Timer
This is the first interval timer you’ll see with a set-up that is this fast and easy.
$1.99 ➞ logiciel gratuit du jour

MTG Mate - Magic Life Counter
This comprehensive app that allows you to easily track your game and find and save your card collection.
$0.99 ➞ logiciel gratuit du jour